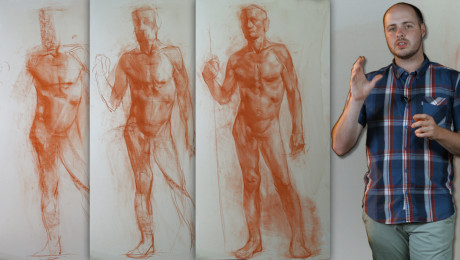 Join Ukrainian-born artist Iliya Mirochnik as he passes on a 250-year-old academic method preserved at the Repin Academy in Saint Petersburg, Russia and seldom taught outside of the Academy.

This Russian Academic Figure Drawing workshop explores the human figure as a constructional mechanism in space through the medium of drawing.

During the workshop, Iliya Mirochnik will demonstrate drawing principles for the entire class and provide anatomical explanations and diagrams for each participant individually. Participants will also learn to stretch paper and work on large scale drawings.

The primary purpose of this 3-day intensive is to understand anatomy not only as an academic discipline but as the means through which the human figure should be viewed and depicted.

Participants will develop their knowledge of the underlying structures of the human form and use them to draw the model from life.

This workshop will consist of a long pose with an emphasis on rendering and learning to tie in structural anatomy with surface form.

Participants will also be drawing quick figure sketches to practice capturing the significant anatomical structures responsible for the gesture.

Originally from Odessa, Ukraine, Iliya Mirochnik immigrated to the United States in the early 1990s with his family. From a young age, Iliya pursued training in the arts. In 2013, he completed his studies in St. Petersburg, Russia in the prestigious I.E. Repin State Institute of Painting, Sculpture, and Architecture with a Masters of Fine Arts degree in painting. In his paintings he aims to connect the Russian aesthetic with American sensibilities, creating images that go beyond their origins. He has been the recipient of a number of prestigious scholarships and awards both in the United States and in Russia, winning the “First Place” award in the American Portrait Society’s International Portrait Competition. Iliya has exhibited within the United States and abroad, including two solo exhibitions, in New York City and Salzburg, Austria. In 2015 Iliya was selected to develop his design for a public monument for Iconbay Residences in Miami, Florida in collaboration with The Related Group architecture firm. Iliya Mirochnik is currently a Visiting Full-Time Professor at Ringling College of Art and Design where he teaches painting and drawing in the Illustration Department. Iliya also currently teaches at the online art school, New Masters Academy.