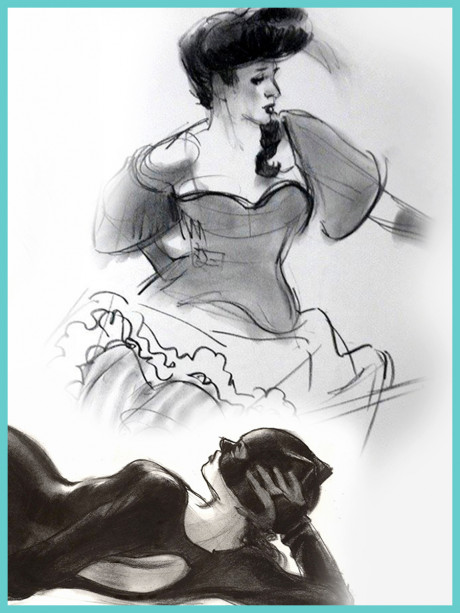 In this 10-week online class, you will learn to capture the dynamic expression of the costumed figure with Disney legend Bill Perkins.

Whether you are a figurative painter, illustrator, story board artist, or animator, this is a great class for any artist who wants to get more feeling and expression in their costumed figures.

Bill Perkins has been working in animation for 30 years as a Layout Artist and Art Director. His work has influenced many memorable animated films such as: The Little Mermaid, Rescuers Down Under, Beauty and the Beast, Aladdin, Space Jam, Shrek, Bolt, Winnie the Pooh, Tangled, and Frozen.

In Costumed Figure Drawing and Characterization you will explore the topics of the quick sketch, dynamic and subtle action, weighting, rhythm, stress and folds, designing shapes, and the impact of drawing techniques as they relate to drawing the costumed figure.

You will analyze master drawings through history, and Bill will demonstrate how we can use these concepts to improve the clarity of our costumed figure drawings’ feeling and expressions.

All students will receive online access to the class recordings and reference images for 12 months.

After graduating Art Center College of Design with honors in illustration, Bill began his fine art career in 1980 painting for galleries in Redondo and Laguna Beach, California, Taos, New Mexico and Tucson, Arizona.

His work has been exhibited at the Springfield Museum in Utah, and the Monterey Peninsula Museum of Art. He was one of the first members of the Plein Air Painters of America.

In 1983, Bill began teaching, first at Art Center, and later at Associates in Art, LAAFA, Cal Arts, and Concept Design Academy. In 1986 he joined Walt Disney Animation Studio as a layout artist and later Art Director during their boom years, through 1994.

After his first tour at Disney Bill continued to Art Direct and do visual development for Warner Bros, DreamWorks, ILM, Character Builders, and his own High St. Studio.

During his film career, Bill’s work has influenced many memorable animated films such as: the Little Mermaid, Rescuers Down Under, Beauty and the Beast, Aladdin, Space Jam, Shrek, Bolt, Winnie the Pooh, and Tangled, and Frozen.